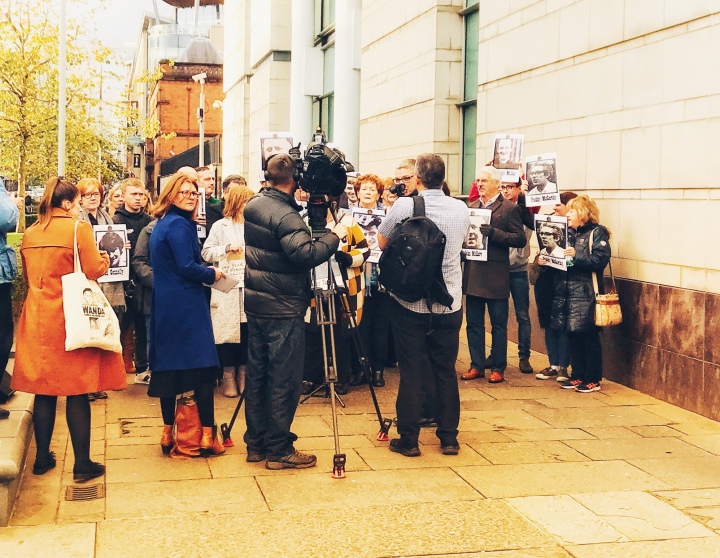 It was an incredible scene. St Mary’s Hall packed with families affected by state violence. They came together under the title of an event by Relatives for Justice called “Forgotten Victims”. Family members from across the North put their hands in the air and told a snapshot of their story. All to say“Me Too”, in an environment during the peace process where the only victims considered worthy of attention were victims of republican actions.

“Excuse me, Im sorry, I’ve never spoken before”, a phrase used again and again. Apologising for taking their place and explaining their loss, their pain and their needs. Mothers, sisters, fathers, brothers, children. All taking a moment to say their loved ones while not forgotten in their homes were being ignored in the peace process discourse. Ignored by the Good Friday Agreement.

During that hot August Féile afternoon there were families who realised that they had all been affected by the same incidents in Ballymurphy in August 1971. After the meeting those families came together and pieced together their story. They knocked on doors and gathered eyewitness testimony.

In the following years I was privileged to be part of that journey. Making the story a narrative of the Ballymurphy Massacre. Putting together the demands including a full independent investigation. Together with the families I watched and heard them grow a voice which told the story to all who would listen.

The first telling of their story in St Mary’s as part of another Féile, was described by some of the children of those killed as being like the funeral they did not get to attend. The heavy sobs during the music that was played, chosen by families as special to their memories, still resonate with any of us there that afternoon.

From there the families have achieved much. Party political support. Irish government support. Community recognition and support. Now it’s like we always knew of the Ballymurphy Massacre. Ten years ago, I can remember the shock as people realised the extent and viciousness of events that occurred on their streets in the summer of 1971 and a repeated response of “I never knew”.

Now the official record needs to change. The inquestbeginning this week, made possible by the changes to our criminal justice system following the Good Friday Agreement that had ignored them, is a critical part of rewriting history. Pernicious lies were written into the official record denying the families the dignity of truth. Civilians were killed deliberately and with intent by a British state whose soldiers had been told they would be protected. All of those who collaborated in that injustice will not be held to account in the inquest. But still the official record will be set straight.

That families have had to fight for this, at great personal cost, and will now have to endure months of painful process in inquest, all the time listening to howls of outrage from those defending the soldiers who took lives, is exclusive savagery that accompanies the experience of victims of state violence. It will be time for the institutions that collaborated in the lies to provide remedy and protection for these ten brave families.

Accidental heroes to whom we are indebted.

This week I have written blogs on the days of personal testimony heard this week. They can be found here