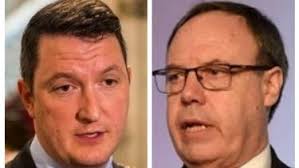 The Orange Card has two sides to it. The one played in Westminster and the one played on this island. In Westminster it’s about London-based political parties using the votes of unionist leaning Irish MPs to secure their position. It’s always a short-term arrangement that ends in disappointment for the Irish MPs in question.

So, it was with the DUP/Tory axis. The DUP have been played like the cocky card player who rides into Dodge when Doc Holiday is sitting at the poker table. They over played their hand and squandered it all. Leaving them with nothing but a border down the Irish Sea and a whole load of posh English MPs who detest them. They made epic strategic blunders, supporting a Hard Brexit, rejecting the Backstop which has resulted in a Withdrawal Agreement, that puts a permanent hard regulatory border down the Irish Sea.

The other side of the Orange Card is the one more regularly played. The one unrepentant Unionists are assumed to be able to exercise due to their ability to ensure community cohesion, and an accompanying threat of revolt and violence. The DUP, having soiled their own Westminster nest, and seeing their advantage in some constituencies under threat, have sounded the bugle. The bugle that they hope can drown out all of the realities that face them until the 12th December.

Arlene Foster met representatives of the UVF and UDA in Belfast. The same groupings have said they are “planning to organise demonstrations and protests using proxy groups”. The DUP describe that exercise as “meeting stakeholders”.

When the UUP’s new leader, or leader elect, or maybe leader, Steve Aiken said the UUP would stand in all 18 constituencies because the DUP have obviously messed up, the DUP went boogaloo, and those some of those “stakeholders” swung into action. The UUP received death threats for suggesting they would stand in North Belfast and threaten Nigel Dodds’ seat. (A seat maintained as a result of sectarian housing policies, but that is another day’s work). A BIG meeting with a BIG flag was held on the Shankill Road with scenes not seen since Ulster Resistance marched into the Ulster Hall, and reminiscent players in the room. It was periscope down for Steve by Sunday as the UUP declared that no they would not stand in North Belfast after all.

On the same day as the big meeting on the Shankill Road, the new PSNI Chief Constable Simon Byrne met with DUP leader Arlene Foster, on the Shankill Road. The tweet says they “bumped into” each other. Byrne has yet to open his “community confidence” chirper about death threats forcing a political party into withdrawing from a democratic franchise. The silence, like the meeting, seems a little… convenient.

On Monday nationalism, pro-Good Friday Agreement and Pro-Remain democrats spoke. They moved to maximise votes for peace and prosperity by sacrificing selfish political interest and standing aside for each other. Over 1200 Irish citizens signed a letter in national papers demanding the Irish government act proactively to protect our rights and peace, get over their partitionist selves and plan for the future of this island. Those positive forces changed the political mood comprehensively.

The Orange Card is a busted flush. Unionism needs to get over it. Policing needs to stand up to it. And then we can all plot our future together.