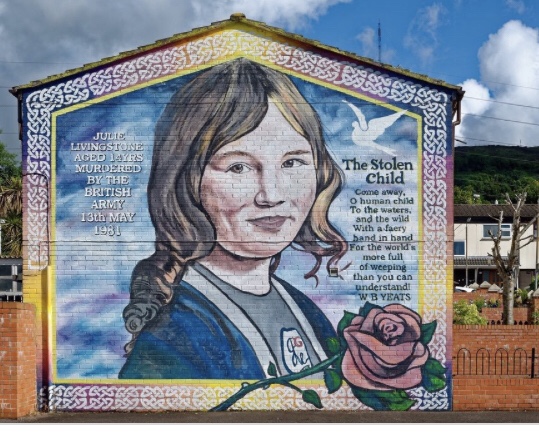 One of my favourite subjects in school was English poetry. When I say English, Irish poetry written in the English language. Being a Smiths and Cure fan Patrick Kavanagh was my man. He pulled my heart even lower and we wallowed Together on grey days, with me finding solace in his misery.

I found Yeats a bit hot and cold though. But then, one afternoon, while the teacher was trying to enthuse us about the different interpretations what the old boy meant by a “greasy tills” I was flicking through the pages of the textbook and began to read Stolen Child. The rest of the class, the classroom and late 1980s Tallaght melted away as I was transported to Sligo mists. I was transfixed by evocative language and words, which bring us on a journey to a safe comforting place, despite devastating loss and pain. It is truly magical.

When the Livingstone family, their friends and Lenadoon community painted a mural to remember Julie using Yeats’ poem Stolen Child I cried again. It is perfect. Julie Livingstone was stolen when she was killed by the British army in 1981, and remains forever a child while some of her nieces and nephews have their own children now.

Compared to other conflict zones there were very few children killed during our conflict, and even fewer little girls. In every home where this unique loss was visited there is an experience that travels across time in a very special way. It was especially different for parents, whose heart sore loss would and could not heal. Siblings will often speak of how they lost their sister or brother, and also their parents that day. We all know the loss of a child requires special response. Callousness in the face of such loss, especially when caused by intentional violence, is unconscionable.

It is an injustice to the family, who suffer most and it is an injustice to our society that struggles to move past our conflict and create a sustainable peace. All actors must face up to the harms they inflicted. They must refuse the temptation to hide from responsibility. But the state has particular legal obligations that must be met.

Julie Livingstone, a stolen child whose truth calls to us despite the efforts of those who choose to silence her. And we are listening.