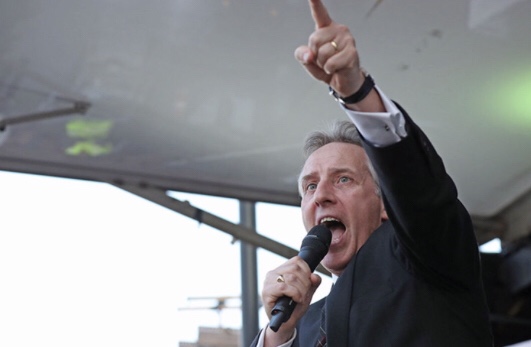 It is our duty to call out hatred when we see it. We have a choice in those moments we see something we know is really out of order. We can look at our shoes, and hope by being quiet we don’t make it worse and it goes away, or we can take in a breath and call it out knowing that there may be the consequence of discomfort, or worse. Sometimes it is difficult sometimes it is easier.

In Belfast the Independent Unionist candidate local election candidate is using hate for her political platform. Jolene Bunting’s posters are an incitement to racism. Sharing images of them on social media shares her message. Last July more the 100 formal and informal complaints were filed against Ms Bunting with the Local Government Commissioner for Standards recently for public far-right displays and “offensive and sectarian” social media posts. The Commission launched an investigation and there was speculation that she would be banned from standing for election. However, our street furniture is now host to her posters. “Local homes for local people” is racist. “Put veterans before immigrants” is racist, with a touch of jingoism thrown in. It is difficult to see her managing to get elected but if that message is facilitated or echoed then it is possible.

In Westminster last Friday we saw hate platformed as part of some Nuremburg type Brexit rally.

On that platform, Tommy Robinson, a right–wing extremist whose past memberships include English Defence League and Britain First, strode up and down, and shouted about “immigrants”, Syrians and “Turks”. Jolene Bunting organised a “Free Tommy Robinson” rally in Belfast when Mr Robinson was imprisoned for 13 months for multiple breaches of court orders.

That platform last Friday also Mr Ian Paisley MP stride up and down shouting “We are red, we are white, we are dynamite”. And he kept up the screaming hyperbole for the excited crowd. That crowd flew union flags, Ulster flags and Parachute Regiment flags. A couple of Orange Order bands from Scotland came down for the craic too and marched and played their tunes for the beer swilling crowd. Some of that crowd surrounded journalists from Channel 4 news and CNN, threatening them and forcing them to leave.

On the parallel of this very dark and growing environment, the Conservative Party/DUP Confidence and Supply arrangement somehow survives. Mutually exclusive power hunger and disrespect for anyone else is their life support machinery. Their recent discussions on Brexit have included how the devolved government would have more say in future negotiations. They are of course having these discussions wihout Sinn Féin or any of the other parties, as though they can form a government on their own, or without Sinn Féin.

Given the total disregard to the Good Friday Agreement to date such a development isn’t out of the question. We all know the mantra “We want to go into government in the morning, Sinn Féin is the only party preventing government”. Could Sinn Féin or the other parties go into government with an unrepentant DUP who have demonstrated that they are not interested in genuine power sharing? Would any party share power with those who are more comfortable on a platform with the extreme right than they are with those who only wish to live their lives with the dignity of the fulfilment of their human rights?

Every day the DUP manage to make it more difficult to foresee that the devolved institutions might ever see the light of day again.