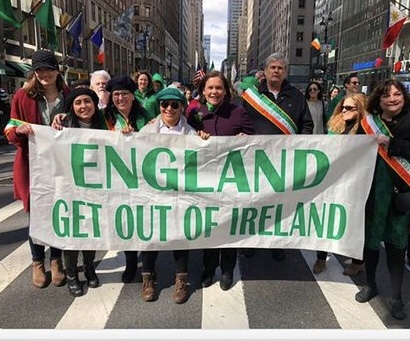 There’s an amazing song from the 1960s “Don’t tell me what to do”. I’ve only come to know it recently, which is sad because I wish I’d had a song for the moments in my teens and twenties when I needed a bit of courage, and the words of Simone De Beauvoir weren’t easily recalled. In 1963 Lesley Gore sang “I don’t tell you what to say, I don’t tell you what to do, so just let me be myself, that’s all I ask of you”. It’s a bit of an anthem.

Of course, the song is about women’s rights. But this week I’ve had it ringing in my head. It seems us nationalists are just too uppity. We don’t recognise a “good” banner from a “bad”banner, or an acceptable song from an unacceptable rebel song and basically, we’re being told that we should be seeking a lot more permission for expressing ourselves, our rights and our destiny.

People cleverer than me are this week writing and sharing lists of the stuff we mustn’t do. Ranging from singing along to the Wolfe Tones in our local park, to seeking a border poll, we really are becoming used to being scolded. Whether from early morning “talk shows”, a couple of notable newspapers whose keys seem permanently to autowrite “Fury” and “Outrage”, to the regular tweets of Irish government ministers, we are chastened for daring to express ourselves or seek more in our own time.

Fear is often dressed in the clothes of superiority diminishing courage. The politics on this island have reached a new era. An era when the northern nationalist minority is approaching its demographic and political tipping point. Ulsterisation is exposed for its corrupt, right wing bias. Project Northern Ireland is finished. And southern partitionism is exposed. Southern–only parties might belatedly try to pull on a green coat, but it is thread bare.

Sharing our land requires compromise. Unfortunately, that principle has become compromised by too many years of one-sided efforts. However, we must always endeavour to do the right things for the rights reasons and shape the ground, so a positive future is built. And that will be with confidence and without anyone’s permission.

Unionist criticism of what is acceptable in the context of the systemic denial of rights and genuine partnership will be dismissed for what it is. An attempt to exercise power where there is none.

Consecutive Dublin governments have done little to nothing to vindicate the rights of those who have lived with, and indeed championed, the peace process for 30 years, but are still denied equal citizenship. The Dublin Government is as responsible for squandering the historic opportunity of the generous compromise that surrounded Stormont as anybody else. Rights will no longer wait. And freedom of expression is not seeking permission.